What was a certificate written in Italian, awarded to local man Mathew Hoile, doing in the Museum collection?  Once translated, it revealed the story of an amazing rescue that took place in 1916. Whilst the First World War raged across Europe, merchant vessels had to brave the dangers of the seas and enemy action to get goods home. Deal & Walmer’s lifeboats worked throughout both world wars. The storm that started on Friday 17th November 1916 was the worst for years. The sea was so rough that the Kingsdown boat failed to launch. It called on the North Deal boat, The Charles Dibden, which headed out to the Goodwin Sands at 10pm on the night of the 19th to aid the Italian steamer Val Salice, en route from Sunderland to Italy with a cargo of coal. 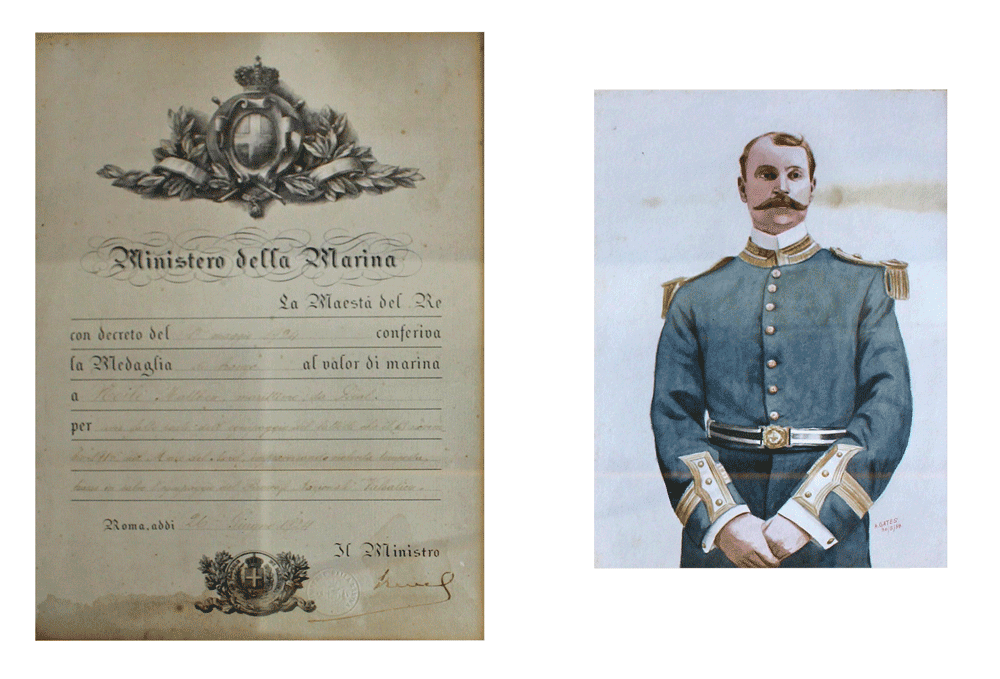 Despite the huge swells and the difficulty of evacuating 30 crew, none of whom could speak English, the lifeboat was kept steady in the appalling conditions and all crew were saved, although sadly not the ship itself. It wasn’t until 3am on the Monday morning that the lifeboat made it back to shore.

The war’s aftermath meant it was eight years before the Italian Government was able to show its gratitude for this amazing rescue. On 24th August 1924 they sent Captain Raineri-Biscia, the Italian Naval Attaché, to Deal. On behalf of the King of Italy, the Captain presented all 15 members of the crew with a certificate and a medal in a ceremony at the Town Hall.

The Cox at the time of the rescue had by then retired but was at the ceremony to collect his medal. So was the new Cox, William Hoile Jnr, brother of the holder of the certificate.

The Museum doesn’t have the medal that accompanied the certificate, but they were described at the time:

‘The medals are of bronze, inscribed with the name of the recipient, with the further inscription Al Valore di Marina Mars del Nord, 19th Novembre 1916. On the reverse is the Italian cross surrounded by a wreath of laurel leaves.’

We wonder if anyone in Deal still has one of these medals?